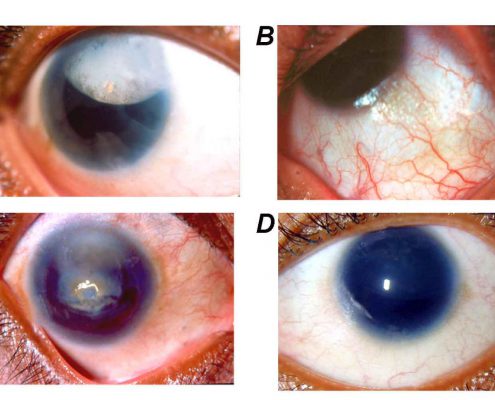 Phenotypic expression of aniridia with PAX6 gene mutation. The aniridic probands showed typical features of sclerocornea with nystagmus in proband 28–1 (A); Foveal hypoplasia in proband 27–1 (B); Ptosis, microcornea with dislocated cataractous lens in proband 10–1 (C); Ectopia lentis in proband 16–1 (D).

Aniridia syndrome is a complex congenital disorder, comprised of a variety of different medical issues, the most poignant of which is the absence of the iris in the eyes. It is most often detected at birth, and the most distinct feature is that the child will appear to have no iris coloration, with dark eyes. Commonly, those with aniridia will experience a very limited range of vision, as well as light sensitivity. Sporadic aniridia is found in cases in which neither parent has the disorder.

In cases of aniridia, the cause of the disorder has been linked to mutations of the PAX6 gene, which is known to be responsible for the cell maintenance and development of the eyes, kidneys, pancreas, and certain areas of the brain. (Source: http://www.visionaware.org/info/your-eye-condition/guide-to-eye-conditions/aniridia-6162/125) In patients with aniridia, the inner eye structures are not fully developed, including the retina and the optic nerve.

The lack of iris is just one of the symptoms of this disorder, however. There are a set of medical issues that can accompany aniridia, in both children and adults, and these can develop at anytime from birth through young adulthood, and they include corneal disease, cataracts, glaucoma, diabetes, metabolic issues, and autism spectrum disorders. Though many of these issues are common in the general population, those with aniridia are known to face them earlier in their lives.

For children who have sporadic aniridia, there is a 1 in 3 chance that they will also have WAGR Syndrome, which predisposes the child to the likelihood of also having one or more of the following associated problems: Wilms Tumor, which causes kidney tumors most often prior to the age of 8, gonadoblastoma, genitourinary abnormalities, the possibility of varying degrees of mental retardation, and learning disabilities.

Additionally, those with aniridia can face a greater risk of additional medical conditions such as obesity, gluten intolerance, metabolic problems, and diabetes.